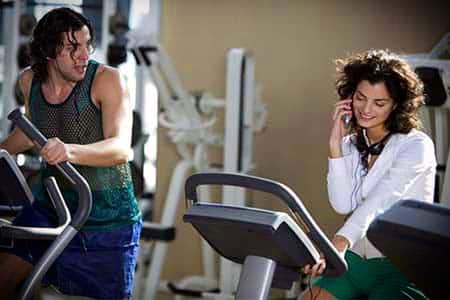 Are You Working Out Hard Enough

Before you get the idea that you should discontinue all types of exercise because you’re not getting the results you want, you need to stop and see if you’re working out hard enough to make a difference. Don’t get me wrong, I applaud all forms of exercise. Doing something is always better than doing nothing at all, but for those who want to reach specific goals and see a difference from their workout, putting in the time isn’t enough. It takes commitment to getting the most from your workout time.

Can you zip through your workout without breaking a sweat?

That may be part of the problem. When you first started working out, you probably grunted and groaned a lot through each movement. The longer you worked out, the easier the routine became. That’s because the workout did what it was supposed to do, got you in better shape. However, if you’re still doing the same workout after several months, there’s a problem! Not only should you be increasing the number of reps, number of sets, intensity or amount of weight, you should be varying your workout. Your body becomes efficient, which means it burns fewer calories causing plateauing.

One sign you’re not working out hard enough is that you can talk while working out.

Heck, some people that are piking it, can even sing! While they may have great voices, they should be gasping for air while they bend, twist and lift their way to fitness. One test of effort from the U.S. Office of Disease Prevention and Health Promotion is how much you can say. If you can utter more than a few gasping works and don’t need a break, it’s time to ramp it up and get serious.

You’re not working out hard enough if you feel great and ready to go dancing after working out.

Don’t expect muscle soreness every time, but you should have it on the days you’ve worked your hardest. Otherwise, you haven’t given muscles a true workout, but at least you’ve kept moving. If you want more than just maintenance and make true progress, you’ve got to do more as you get fitter. Your body will let you know by mild soreness that reminds you that you’ve worked it hard. Remember, there’s a big difference between pain and soreness. Pain should never be ignored and soreness should be applauded for the hard work it took to create it.